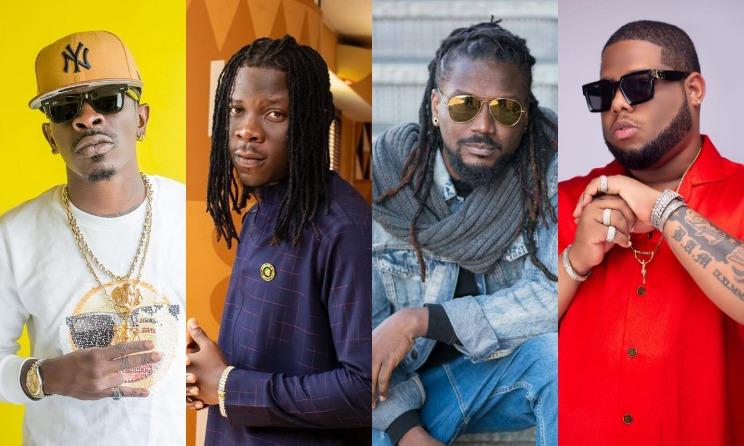 Have you ever wondered who the richest musician in Ghana is? Who is your favorite artist? You will probably be shocked to find out where they are on the list. Forbes Africa reveals the net worth of these artists in 2020, through which we can rank their wealth.

Most of these artists started on humble grounds and worked hard to the top, for that reason, all of the artists on this list are musicians who have been in the industry for a long time now.

How do they amass this wealth? Through music alone? No. most of these musicians are entrepreneurs. They have their businesses, some of these personal businesses even more income for them than music.

Below, in a particular order, are a list of the richest musicians in the country at the moment.

Michael Owusu Addo, also known as Sarkodie has been in the Ghanaian music industry since 2005 and is worth a whopping $10million. The rappers’ music is recognized by individuals and organizations all over the world, with millions of YouTube views and followers.

He has been named the ‘artist of the decade’ in last year’s Vodafone Ghana music awards. And the first artist to have won the BET’s ‘best international flow act’ of the 2019 BET Hip Hop Awards.

Apart from numerous awards in music, he has bagged some endorsement deals over the years. He became the brand ambassador for Samsung Electronics in 2012, signed an endorsement deal with Fan milk Ghana in 2013. Sarkodie owns a clothing line called Sark by Yas, which he launched in 2013.

Rap Doctor, Okyeame Kwame has been active since 1997, impressive is it not? He is worth $7million.Almost 25 years in the industry, he has worked with other renowned artists and has bagged numerous awards over the years including ‘best rapper of the year’, ‘best collaboration of the year’,’ record of the year’, and even ‘he,alth ambassador’ of the year for his Hepatitis B project.

The Okyeame Kwame foundation was founded to raise awareness of Hepatitis. Looks like Okyeame channeling his wealth into a good course.

His songs are strong on teaching Ghanaians to patronize made in Ghana goods and services. Wear Ghana, eat Ghana, and see Ghana.

At number 3 is our self-acclaimed dancehall king, Charles Nii Armah Mensah popularly known as Shatta Wale. The 36-year-old is worth $6.2 million. Since 2013, the songwriter, singer, actor, and director has been the center of controversy. His singing career did start in 2004, with the name Bandana, he just did not receive the recognition at the time.

His awards and nomination are many. He received honoree awards from Nigeria and the USA. Shatta Wale has been recognized as the most awarded dancehall artist in Africa and the most influential musician in Ghana.

Because of his fan base, he has signed ambassador deals with Guinness Ghana Breweries, kasapreko company, Boss Baker Beef Roll, and Infinix Smartphone Company.

Following Shatta Wale closely at number 4 is the Ghanaian hip-pop duo R2bees, made up of Faisal Hakeem and Rashid Mugeez.

Since 2007, they have released back to back hits and has been recognized internationally, collaborating with Nigerian musicians like Davido, wizkid, and wande coal. The group is worth $6million.

They signed an ambassadorial deal with Star Beer brand in 2013.

56 years old Charles Fosu, also known as Daddy Lumba is also worth $6.0 million. The veteran whose career has spanned three generations’ music is loved by many people especially Generation Y.

In 2017, the ministry of tourism appointed Lumba as tourism ambassador

Also beginning her career in 2007 after gaining recognition in mentor season 2 is Rebecca Acheampong, popularly known as Becca. She is worth $5.7 million.

The singer, songwriter, and actress has won the awards for best music video more than four times and has featured musicians in South Africa and Nigeria. She was a brand ambassador for UNAIDS in 2014.

Stonebwoy, born Livingstone Etse Satekla is one of the most popular musicians in Ghana. Many would think he would be in the top 5 of the richest musicians in Ghana, but here he is at number 7 with $5.6 million

In 2015, Stonebwoy won the artist of the year at the Ghana music awards and the best international act at the BET awards.

In 2017, he established the Livingstone Foundation to support and provide scholarships for students of the Tema Methodist day senior high school, which is his alma mater, and has opened his BHIM merch shop in Ashaiman.

He is the brand ambassador for Big Boss energy drink and Tecno Mobile.

Reggie Rockstone is one of the oldest musicians who are still active in the Ghanaian music industry. The 56-year-old is worth $5 million.

He has performed alongside artists from different countries and has been recognized as the pioneer of hiplife or “kasahare” music in Ghana.

He became Globacom ambassador in 2009.

The UK based Ghanaian artist is one of the many artists who is promoting Ghanaian music outside Ghana. With a net worth of $3million, the rapper, songwriter, and singer has been active since 2012 and has worked with musicians from Nigeria, the united states, Haiti, etc.

In 2017, he was appointed as a cocoa and tourism ambassador.

Ghanaian rapper Tinny, born Nii Addo Quaynor started in 1994 and is still serving us with beautiful Ghanaian music. He has won more than three awards out of twenty nominations.

It is not clear if he has other businesses apart from his music career but he sure is making a lot of money.

Which artist’s net worth surprised you the most?