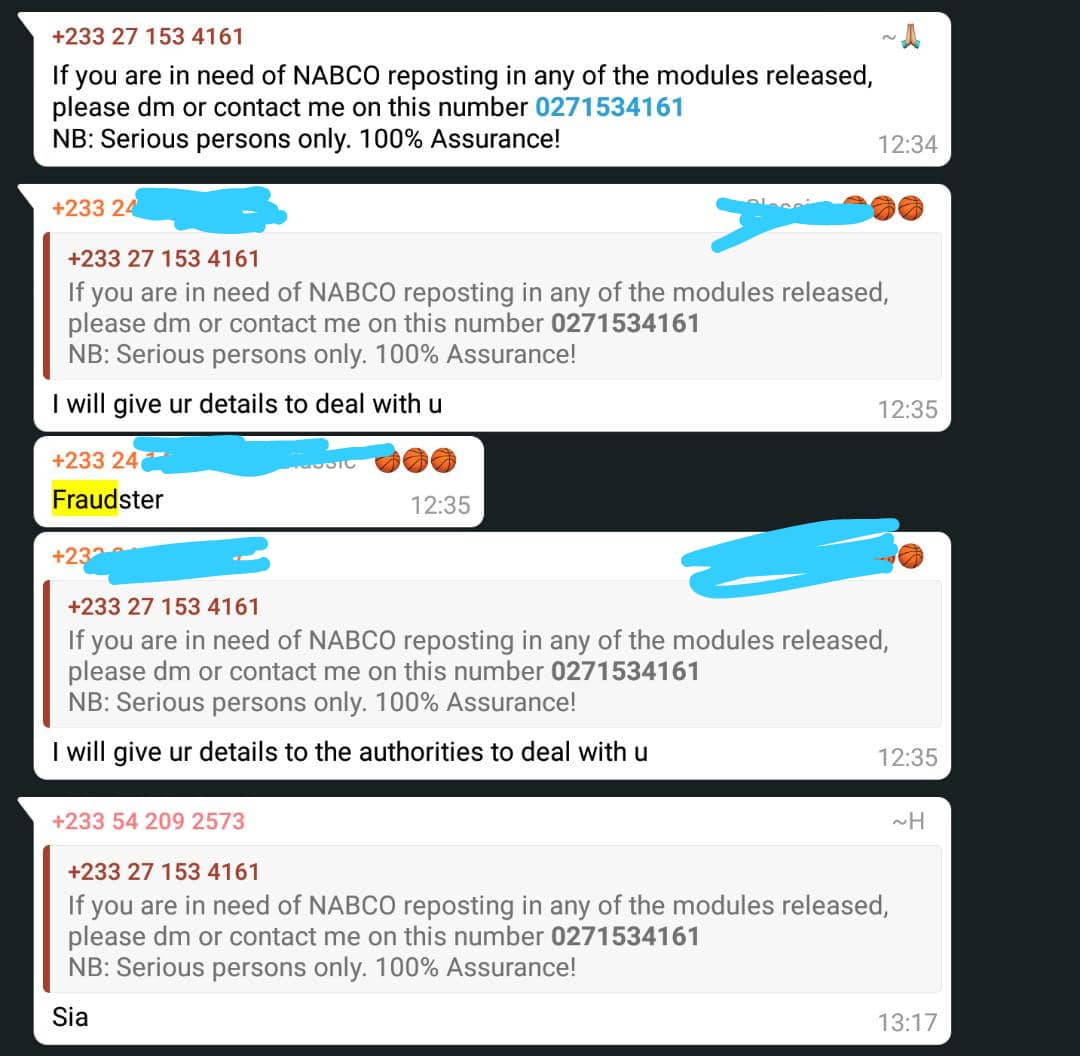 We still are not certain when NABCO December Stipend will drop and so we are on high alert as we all want to enjoy the festive season in high spirit.

That notwithstanding, the issues with NABCO does not seem to end and it seems fraudsters are taking advantage of the situation to dupe unsuspecting individuals.

Just like we reported about boostpal, viewdime and other fraud schemes, we have information on what is a NABCO Fraud.

We can confirm that there is someone who calls himself “Ben Joe” and has registered on Tigo Cash just to dupe unsuspecting individuals.

One user claims Ben asked him to send an amount of GHS 500 for NABCO reposting.

This is how he operates.

First, he builds trust by taking an individual’s NABCO details including the NABCO number, name and District. He then waits for a while and gets back to the victim to tell him/her that the details have been confirmed.

We put him on trial by giving a fake NABCO number, name and district. He still came back to us saying our fake details had been confirmed. This is how you know straight away that he is a fraud.

Then comes the second phase of his scheme. This phase includes asking the individual to pay GHS 500 for the supposed reposting.

In one case, he agreed to take half price first and then take the remaining half later when the reposting is done.

He mostly posts his advertisement for reposting in NABCO WhatsApp groups. Quite noticeably, some people in these groups have pointed him out as a fraud.

When asked if he was a fraud by one of the people who contacted us, he said anyone who said he is a fraud is only saying so because he/she has been given a better posting.

How to protect yourself from NABCO Fraud

Always remember that the lust for illegal stuff could always end you up in the hands of fraudsters. Christmas is fast approaching and boys are looking for “ways to eat”.

If someone asks you to send part payment or delivery fee before they send to you a product or render a service, it is most likely a fraud.

Call relevant activities to check if it is a fraud. Fraudsters will most likely maintain their trustworthy.

Just call them with a different number and tell them you have sent them money already and you are not hearing from them. If they have duped someone already, they will immediately drop the call.

They could use these details to harm you in various ways.

Remember, right now fraudster Ben Joe is using the number: 0271534161. However, it will not be long before he changes to another number to try to dupe more people. Stay safe.