Top Festivals Celebrated in Ghana and Their Significance 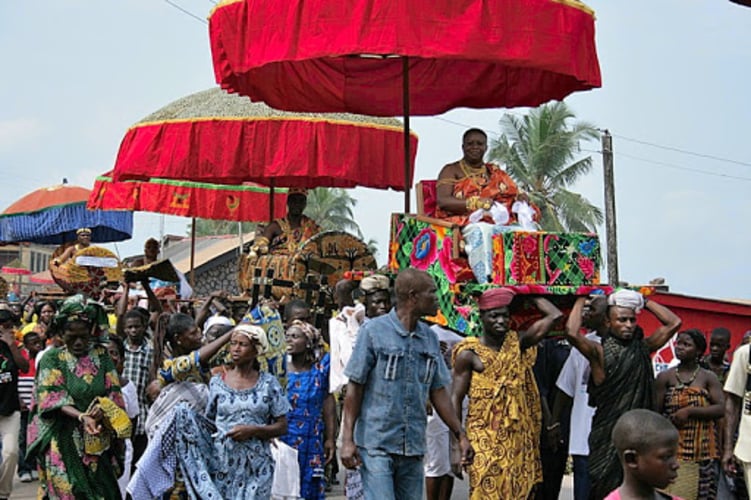 Ghanaians celebrate so many festivals, every region, and their festivities. Events that center on characteristic aspects of a community, be it religion or culture. It is usually marked by local holidays, celebrations, durbars e.t.c. why do we celebrate Festivals? What are the advantages of celebrating festivals?

Festivals bring families and communities together, during festivals, disputes are resolved amicably, tourists come to Ghana, there are so many forms of entertainment. Festivals bring out aspects of our culture that some people do not even know about. There are two types of festivals celebrated here in Ghana, traditional festivals and music, food, and art festivals.

This can be considered as the biggest festival that is celebrated, by the people in the Greater Accra Region of Ghana. It is celebrated in May. Homowo, meaning ‘hooting at hunger’. It is known that in the past, there was a great famine which was later followed by a bumper harvest, hence, the people celebrate to hoot at hunger and thank the gods for this. During these festivals, there is a ban on music and any form of noise-making, chiefs sprinkle a traditional meal called ‘kpokpoi’, made out of cornmeal and palm oil on the street, pour libation, followed by a big celebration.

Aboakyir festival is celebrated in May, by the Efutu-winneba people, Aboakyir means ‘game catching’. On every first Saturday in May, two Asafo groups called Tuafo and Denkyefo go out on a competitive deer hunting expedition. Before, it was a leopard hunt. A durbar is held and rituals are performed. There is a large celebration by the people characterized by eating and drinking and merry-making.

This festival is celebrated by the people from the fishing community, Elmina in the central region of Ghana. It is celebrated in July, they perform activities to honour deities. There is the net casting ceremony, there are durbars, pouring of libation, and more. There are merry-making, music, and dancing.

Asafotufiam is celebrated in August, every year by the Ada people from the eastern part of the Greater Accra Region. It is celebrated to commemorate victories and defeats in past clashes and wars with Asafotufiam and also usher in the harvest season. There are many activities such as stool cleaning, important rituals, libation, mock battle performance, durbars celebrations.

It is celebrated in early September every year in cape coast, central region to show appreciation and gratitude to the 77 deities in the communities for their protection, bumper harvest, overall, for a good year. Just like the Homowo festival, there is a total ban on music, drumming, and noisemaking. Fishing in the Fish lagoon is paused as well. Health day and ritual day ceremonies and rituals are observed alongside merrymaking.

This is the last popular and important festival on the list. It is also celebrated in September by the Anlo Ewes from the volta region of Ghana, to escape the reign of a wicked king Agokorli. During the festival, women are seen dancing backwardto show how their ancestors dancedwhen they were escaping, so that if they were followed, they wouldn’t be caught. There is peacemaking, stool cleansing, sanitation exercises, merry making and more.

Apart from the festivals stated above, there are many more music, art and cultural festivals that have been introduced a bit later than the traditional festivals. They also carry equal significance. They include;

This is a street art, food, and music festival that welcomes Ghanaian and foreign artists and educators. It is celebrated at Jamestown, one of the historic towns in Ghana, to reconnect people through performance, conversation, music, and culture. It takes place in August and this year will be it’s 20th celebration. The beauty of art and culture is immaculate.

Pan- African festival of Art and Culture was introduced by the late author, Efua Sutherland serve as a ‘homecoming’ for Africans abroad. As the name suggests, there is a display of art, history, and cultural legacy.

It welcomes novelists, poets, spoken word artists, musicians, painters and everyone in the creative arts industry. Introduces diverse aspects of literature and more.

Our Festivals and culture are all we still have to remind us of who we were and who we still are. It is about time we explore other cultures, if you’re from the Asante region, visit volta region to celebrate the Yam festival, learn something new, get involved and tell someone else about it.

Make it a point to be at any of these festivals when the pandemic dies down, and when life returns to normalcy.

What tribe are you and what do you celebrate?