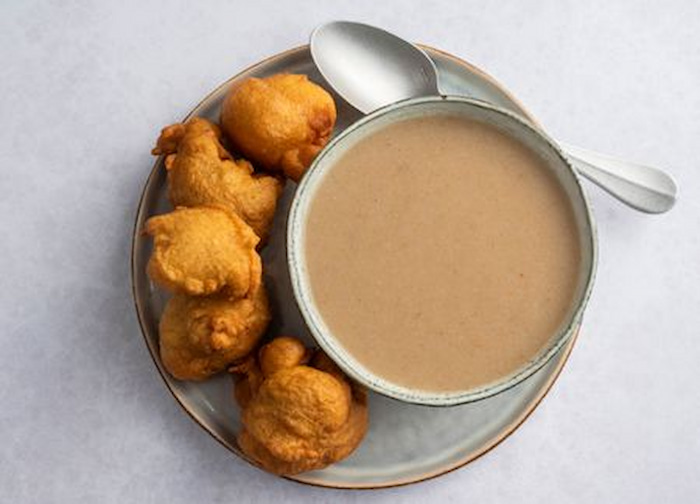 Ghanaians are known to be early risers. The most common breakfast foods eaten in Ghana include both savory and sweet dishes, making it possible to consume your body’s daily intake of nutrients in one meal.

With the popularity of western food in Ghana, there has been an explosion of cafes and restaurants that serve both local and foreign delicacies to cater to the growing population of Ghanaians who are constantly on the go and are looking to fuel their bodies with protein and carbohydrates.

The most popular breakfast meal in Ghana right now is what we call ‘Foreign’ breakfast because it consists of foods from other countries such as eggs, sausages, toast with butter and jam or peanut butter, pancakes and waffles or any combination of these foods.

A healthy breakfast is the most important meal of the day, but it’s not always easy to figure out what to make first thing in the morning.

Whether you’re on-the-go or relaxing at home, try combining breakfast food can help fuel your body and satisfy your tastebuds with whole grains, vitamins, and protein, but without all of the sugar and carbs that usually come with breakfast foods.

What is a breakfast

Breakfast is the most important meal of the day. It not only provides you with energy to start your day, but it also helps to regulate your metabolism and give you a little boost before a long day ahead.

Why is breakfast important?

Breakfast is the most important meal of the day. This is because it kick starts your metabolism, giving you energy for the rest of the day. It also sets you up for a healthy diet as you can eat less during lunch and dinner if you’ve eaten a balanced breakfast.

Is breakfast taken only in the morning?

Breakfast is a meal typically eaten in the morning, but can be taken at any time. In Ghana, breakfast is usually taken at anytime between 7am and 10am. There are many different types of breakfast combinations served across the country.

Mostly called corn dough porridge in Ghana, it is a paste made by boiling a mixture of corn dough and water. The corn dough is allowed to boil in water for a while and is stirred till a uniform paste is formed.

To give it a great taste, sugar and milk are added to it. The koko is accompanied by what is known as a “bofroat”. The bofroat is the equivalent of a Ghanaian donut, which are deep fried and enjoyed with koko or just as a street snack.

It is called “Hausa” because it is believed that it was first made by the hausas. Early in the morning, you can find many sellers along the street. These are usually Muslim women from the North.

It looks like a thick soup which is made from millet and has a few added local spices to it.  Hausa Koko is mostly served with Koose, a millet based paste which is made into balls and fried in vegetable oil.

Ghanaian breakfast is typically not a meal that consists of just one type of food. The most common breakfast items are bread and tea. Bread can be found with different types of fillings such as cheese, eggs, or butter.

Some people will have a boiled egg on the side to go along with their bread and tea. Tea can either be browish or black tea and is usually served with milk and sugar for those who enjoy it sweet.

Rice water is simply rice boiled with a lot of water until it softens into a soluble paste which is very similar to porridge. Sugar and milk are also added to it, to give it more taste. It can also be accompanied by bread or biscuits. You can choose to add bread or not, and it will still be great to eat.

This is a combination of milled roasted corn and groundnut. It’s normally prepared very thick and mixed with milk and sugar to taste. It’s eaten either with no accompaniment or with bread and sometimes egg.

Waakye with shito and meat/fish

Waakye, a popular breakfast dish, consisting of boiled rice and beans mixed with fried onions and tomatoes served with a stew, shito, hard-boiled egg, “wele” or any meat of your choice.

Rice and stew is the favorite breakfast meal in most parts of West Africa. It is a meal that not only gives you a balanced start to your day but also fills you up for hours to come.

Making it can be as easy as dumping the ingredients into a pot, stirring them together and waiting for them to cook on low heat for about 30 minutes.

Oats are a healthy and filling breakfast, especially when combined with bread. One great way to make oats more interesting is to add milk or yogurt before you cook them.

You can also mix different types of milk and yogurt together to create your own flavor combinations that suit your taste buds. Another popular way to enjoy oats is to top them off with fresh fruit such as bananas, strawberries, kiwi, and blueberries.

Many Africans, including Ghanaians, have a breakfast that includes wheat porridge and bread. The porridge is generally made by boiling water with cereal grains such as millet, sorghum, or corn.

The mixture is then simmered until it has thickened to a consistency similar to porridge. After the cereals are cooked they are mixed with sugar and butter or margarine before being served. Bread is most often served alongside the cereal, usually buttered and fried.

There are so many delicious breakfast dishes to try in Ghana. Whether you like hearty foods or prefer something light and fresh, there is a breakfast dish for you. Be sure to include some type of starch with every meal, as it will provide the necessary energy for your day.