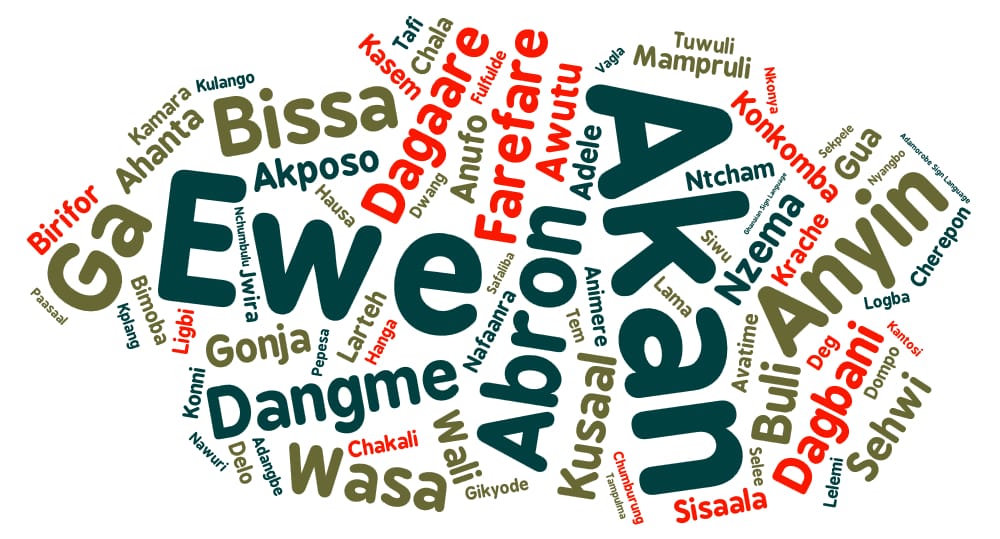 The official language in Ghana is English since the country was colonized by the British, but there are other numerous indigenous languages. Predecessors used to speak these local languages way before the arrival of the colonial masters, and it has been preserved through the years. Still, the English language is predominant in business affairs, education, legal procedures, and the like.

Even though about 36 percent of Ghanaians speak English, Akan Twi leads among the local languages.

There are about 70 ethnic groups in the country, each with their language. Still, since they have been grouped into different regions, many languages are mutually intelligible. Two are three ethnic groups in one region can understand each other because they might say the same things but in a different tone or words.

Below is the list of languages spoken in Ghana.

Why is it important to preserve the local Ghanaian Languages?

Preserving these local languages is essential to preserving or maintaining the country’s cultural dignity. It shows the rest of the world that we have not forgotten who we are or where we came from.

It is a transparent medium through which the world sees Ghana. It is unique to our culture. Imagine if the whole world composed music and sang in only English or one particular language, it would not be wholesome. Still, in Ghana, we sing in numerous languages, and it is unique and beautiful.

We do not want the hope of the future, the little humans coming into this world, to lose a vital part of our cultural identity, the languages. That is why it is crucial to preserve these languages by teaching our children in Ghana and abroad.

To add to that, researchers worldwide have proven that bilingual children, or children who can understand and speak more than one language, show significant cognitive advantages like retentive memory, critical thinking skills, power listening, and multitasking skills.

How to learn the various Ghanaian languages

Thanks to digitization and technological advancement, learning local Ghanaian languages has been accessible through applications, YouTube accounts, websites, and even books (e-books and hardcovers). In Ghana, both the Goethe Institute and Alliance Française d`Accra offer Twi classes.

Some of the applications you can use are Khaya and Akan Twi Guide. You can also find experienced and accomplished online Ghanaian local languages teachers on www.teacheron.com. Through an acquaintance, you can also find good teachers who can teach you the languages through zoom meetings or Skype video calls, whether you are in or out of the country.

Out of the 70 plus languages spoken in Ghana, how many can you speak, apart from your ethnic dialect? Learning your local language is as essential as learning Spanish, French, Dutch, or Chinese. So take the time to learn Frafra or Nzema today!