Hogbetsoso Festival: History, Significance and How it is Celebrated 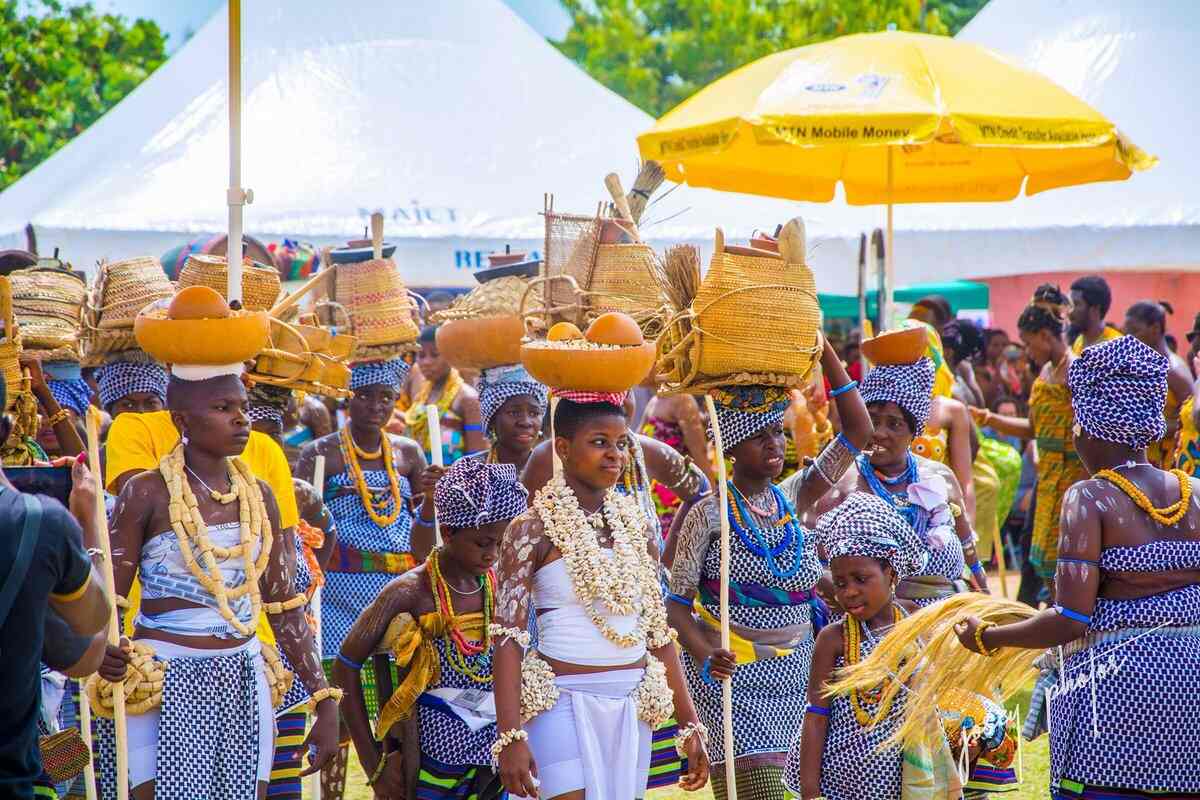 The Hogbetsoso festival is celebrated by the chiefs and people of the Anlo traditional area. Every year, on the first Saturday of November, the people in Keta, Abor, Vodza, Whuti, Dzita, Kedzi, Afiadenyigba, Srogbe, Alapkle, Konu, Atsito, Atiavi, Tsiame, Devegodo among other villages gather at Anloga to celebrate freedom, peace and longevity in remembrance of their culture and roots.

The History of the Hogbetsotso Festival

The Anlo people are believed to have lived in Nostie, a town in present-day Togo. They had migrated from Sudan, passed through Nigeria and Benin to settle at Notsie where they lived under the rule of a wicked king named Agorkoli.

They lived in a thick wall coated with human blood from spiritual sacrifices. The women in the village started pouring dirty water on one spot of the wall to escape the king’s tyrannical rule. The plan worked, and that part of the wall began to soften.

They escaped by walking backward with their faces toward the town so their footsteps would look like they were instead going into the town.

The Anlo people successfully escaped. Hence the name Hogbetsoso. “Ho” means to uproot, “gbe” means day and “tsotso” means crossing over. Collective meaning is “the day the people rose up and moved” from Notsie.

The festival is celebrated to remember their successful escape and freedom from a tyrannical ruler.

How Hogbetsotso is celebrated

The celebration is divided into three activities. Peacemaking ceremony, Purification or “dodede”, and a Durbar. The festival aims to illustrate their departure and work towards peace and success at their new location.

The Anlo people come together and make peace with each other because it is believed that peace and harmony are needed to make their escape successful.

That’s why the Hogbetsoso festival is the time for families and friends to unite and make peace under the direction of the chiefs and other religious leaders.

The purification ceremony cleanses the ceremonial stools believed to house their ancestors. This is done by pouring libation and praying for and to them. This is followed by cleaning the various villages in the Anlo traditional area and chasing away deadly diseases and illnesses that may threaten their lives.

The celebration is climaxed by the Durbar of the chiefs and people. Where there is merry-making with singing and dancing. They dance Adgbadza, formerly known as Atrikpui, which imitates flying birds.

Sometimes they dance backwards while carrying their baggage, a stick in hand, and as they move, they watch from left to right to illustrate the departure.

The women dress in a way that reveals big backsides, called “atufu”. Some say this is where they kept their most valuable possessions while travelling. The Kings’ and Queens mother’s dress in royal regalia.

Significance of the Hogbetsotso Festival

Celebrating Hogbetsotso, or any festival for that matter, is of the essence. Not only does it help us to keep our culture and traditions in check, but it also helps to bring together friends and family from far and near.

People from the Anlo traditional area whose children may have been born in the capital or abroad get to see, feel and learn about where they come from by participating in these celebrations. It’s how they can also teach their children and their children.

When we remember where we come from as a people, we can easily be reminded of where we are headed.

The Hogbetsotso festival is significant in the remembrance of the Ewe culture. It brings together families, chiefs, and even political entities.

It’s a way to invite well-meaning persons who will visit the traditional areas and perhaps decide to undertake specific developmental projects. It’s a way for people to be infected by the contagious cultural spirit that would move them to do the most for the people and themselves.

There is a lot to learn and a lot more to teach. Hogbetsoso is happening next month (November). Visit Anloga and participate in their celebrations to understand and teach someone else.

The Volta region of Ghana is a cultural hub; go see for yourself!