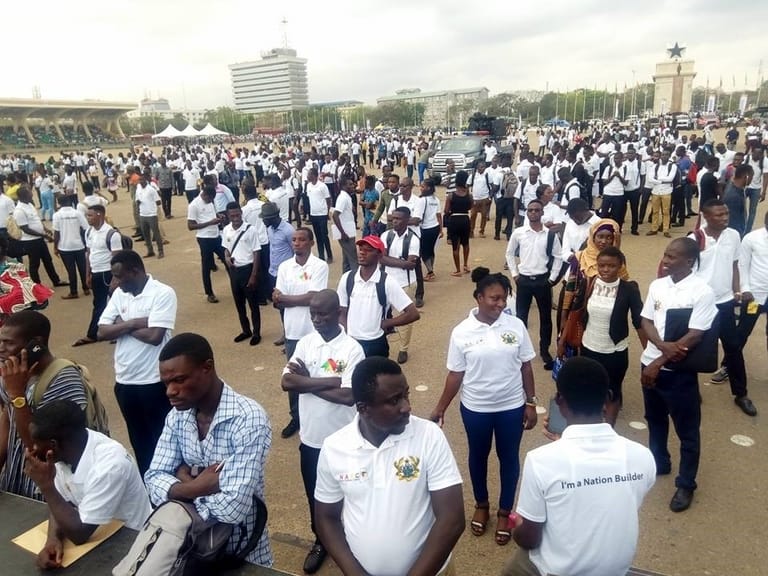 The Coalition of NABCO trainees (CONAT) have through a statement indicated that they will picket to the Jubilee House on Wednesday, May 8, 2019, to petition His Excellency Nana Addo Dankwa Akufo-Addo over unpaid stipends areas among others.

According to the coalition, they plan to massively demonstrate against the management of the Nation Builders Corps for what they describe as a failure on their part to fulfil their side of the contract they have with them.

The trainees whose allowances have not been paid since November 2018 are threatening to hit the streets over the misplacement of some trainees, regularization of payments, and to push for better working conditions.

They insist that after several unsuccessful discussions with NABCO, the only option they have now is to march to the Jubilee house and petition the first gentleman of the land to step in.

A portion of the statement from CONAT read;

“We express disheartening concern to the inconsistent and fluctuated manner of payments of arrears due trainees, recording instances where management have slashed and partially paid arrears to trainees with others especially trainees who resigned from YEA and Youth in Afforestation. Also, mismatch of names, wrong USN and no Ezwich number trainees who haven’t received any of the stipends since the inception of the initiative amid our countless confrontations to authorities to address their predicaments”.

It continued “We want the programme to run smoothly with regular payment and not paying in bit. Change has been long overdue and too long delayed. We Nation Builders must be monetarily fueled on regular basis to revitalize the spirit of nation-building. We add that, due to improper payments, we are unable to plan and that has brought so many challenges to us. It is unfortunate and disheartening that we have come to this conclusion,” the statement noted.

The coalition has also secured permission from the Ghana Police according to a separate statement released.

“We have processed necessary arrangements with the Ghana police service to safeguard demonstrators for the upcoming NABCO trainees demonstration on Wednesday 8th May 2019. Trainees are admonished not to panicking or intimidated because your security is justifiably assured.”

A”ll trainees, especially those with arrears from November, December, January and February are advised to come along with documents which confirm their status as NABCO trainees. These documents will be presented to the Flagstaff House simultaneously with CONAT’s petition to the President as proof of non-payment of arrears. Resignees from YEA, forestry, NSS or other initiatives who joined NABCO and successfully tendered in their resignation letters but still haven’t been paid since November have to harness this opportunity to present their grievances and should come along with copies of their resignation letters.”

In all the trainees are demanding the following from the government:

1. Pay us all unpaid allowances (from November 2018 to date)

2. Henceforth, we demand the regular payment of our stipends.

3. We demand all unplaced trainees be equally placed as soon as possible.