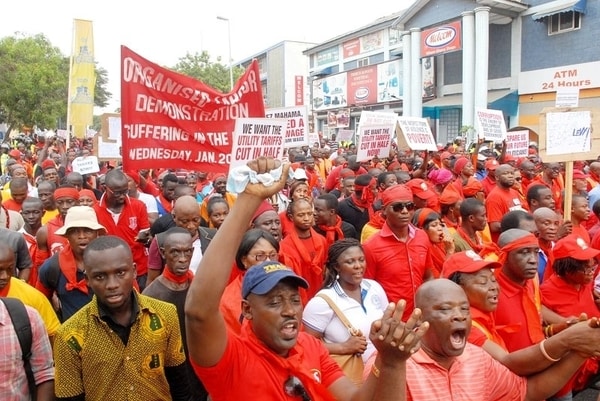 It appears that NABCO Trainees will be going for one of the biggest demonstration to ever hit the country in recent times.

According to sources close to the trainees, as much as 10,000 NABCO Trainees will meet at the popular Obra Spot on Wednesday, and then proceed to the Jubilee house from there.

Although initially proposed for May 8, it appears for security reasons, the demo would take place on Friday, 10th May 2019.

However, some have seen it as a means for NABCO to quickly pay some of the arrears to twart the demonstration efforts.

Stay on Asetena.com for the latest NABCO news.

The leadership of COALITION OF NABCO TRAINEES by this communiqué solidly put to the urgent notice of all Trainees Nationwide and sympathizer that our decision to embark on a massive Demonstration coming remains unabated and happening live whether rainstorm or burning sunshine.

The COALITION admonishes every Trainee that Once bitten, twice shy and this time, there is no room to accommodate partial settlement to intercept the scheduled Demonstration.

Again, Solemnly, Trainees will not countenance any request to jaw jaw on partial payments and compromise any extension of timelines for a hopeful full settlements.

We equitably and considerably withheld our previous Demonstration basically to urge authorities to maintain consistencies in managing this Flagship project upon the inception of February stipends and notice of selective payments of accumulated arrears owed Trainees in some selected districts. But, our hopes for full settlements quashed after payments halted with chunk of arrears still staggering without any formalization of stipends.

We concrete on our strong Appeal requesting the Secretariat to pay all arrears from November to April between now till Wednesday.
Remittance of only March stipends will rather empower Trainees for the massively turn up on Wednesday’s event. We demand joint payment of March and April stipends in addition to all arrears owed Trainees dated back November, 2018.

Factually, the coalition is dissatisfied with the CEO and his management on records of poorly administering this Flagship initiative and strongly blame them as vicariously responsible for all the unbearable afflictions many Trainees are going through.

We therefore fervently request all Trainees to remain unanimous on our collective welfare and prepare massively for Wednesday’s action dubbed 3k)m kuy3n Demonstration.

2. Henceforth, we demand regular payment of our stipends

3. We demand all unplaced Trainees be equally placed as soon as possible.

We are by this communique calling on all trainees of NABCO nationwide and sympathisers to get prepared for the revolutional demonstration for addressing our protracted grievances and better working conditions scheduled for , Meeting Point :Obra spot, circle, Dress code: NABCO t-shirt with red armbands. Come along with your Engagement letters and resignation letters (YEA AND YOUTH IN AFFORESTATION)