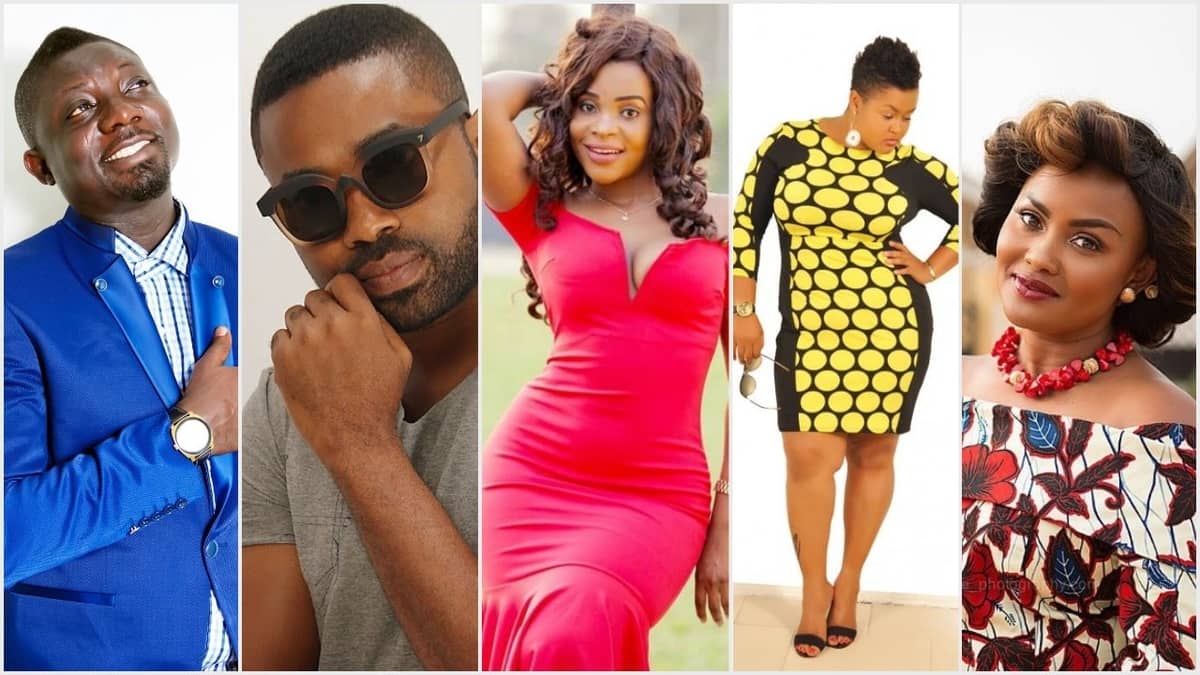 The kumawood movie and awards industry has taken over the Ghallywood movie industry, established by a Ghanaian businessman, Samuel Kwabena Darko, the industry has nurtured many actors and actresses to make movies in the twi local language.

People patronize and enjoy the movies because it sells Ghana, Ghanaian culture and language and the indigenes enjoy it better. The industry makes a lot of money from the movies they make.

They make up to 50 movies a month, the actors seem to be paid well and it gets them some kind of popularity.

The industry has bred many actors and actresses including nana ama mac brown, kwadwo nkansah, Emelia brobey, Reagan akwasi Jackson among others. But who are the top actors?

The ones who are taking over the industry in recent times? The ones who are bagging endorsement deals? We have compiled the list of the top 10 kumawood actors at the moment.

Below are the top 10 kumawood actors

Akwasi boadi, popularly known as ‘akrobeto’ is one of the big faces of kumawood. He has been featured in more than 100 movies since he joined the industry in 2008. He used to perform in the Key Soap Concert Party alongside Agya Koo, Mercy Asiedu, and Nkomode until he was discovered by Apostle Kwadwo Safo in the 1990s.

Now, not only does he act, but he is also the host of the television show ‘the real news’ on Utv. This career has taken him to BBC African news. He even became popular in November 2020 for reading sports results from European football funnily and exaggeratedly. For his work as a news anchor on ‘the real news’, he received a lifetime honorary award.

Kofi adu whom we all know as Agya koo has been in the industry since 2008, but before that, he was a cobbler in the Ashanti Region of Ghana. He was discovered by the Key Soap Concert Party comedy show where he worked as a comedian.

His career at first was not acting or comedy, he has journeyed to Accra to become a musician.

Agya Koo starting acting and even received an award from the then president of Ghana, John Agyekum Kuffuor. He is so talented that, he sometimes did not need a script to begin shooting a movie.

He is still in the industry and has not ceased to be one of the best entertainers of all time.

Even a 3-year-old child knows who kwadwo nkansah lil win is. The actor, proprietor, musician, and CEO of Weezy empire are very popular in the country at the moment. His comic style of acting is loved by many. Even though he has been the center of controversy, he still manages to keep his fame and love of his viewers.

The 32-year-old won the ‘favorite actor’ award at the sixth edition of the annual Ghana movie awards in 2015 and was also honored by the United Nations for his numerous campaigns against illegal migration in West Africa.

Kwaku many is another popular kumawood actor who has starred in many movies since he joined the industry. He has been in movies like kwaku azonto, great battle, and many more. He is not only an actor but a musician and presenter as well.

His small stature does not stop him from doing great things. ‘adwene kessie’ as he is popularly called has been in the industry for some time now and has stolen the hearts of many with his comic style of acting

He was introduced into the industry as kwaku Manu and has since started in movies like ‘megye wo girl’, ‘our judges’ among others.

He has been in many advertisements as well.

The kumawood actor and pastor at Jesus Power Evangelistic Ministry is also a popular face of kumawood. He is known for his roles as pastor in many movies.

Bill asamoah has been acting over the decade. He stared in azonto ghost, the mighty one, among others. Asamoah is the chairman of Ghana actor’s guild, CEO of Okyerema entertainment, and The Boss Grooming.

Nicknamed ‘big akwesi’, the kumawood actor and tv presenter have featured in many movies and television series in the country.

Joseph Osei, also known as ‘wayoosi’ is popular in the movie industry. He is also into music and has acted alongside popular Nigerian actor, Osita Iheme. He is known for being very fluent in the English language as well

The 45-year-old has stared in more than 50 kumawood dramas.

Abraham Davies is also known as Salinko, he has also been in the industry for quite some time now. He is a multi-talented actor, a movie producer, and a former parliamentary aspirant.

It is a good thing the industry is doing, making good movies, nurturing great actors, and generating revenue for the country while they are at it. Perhaps in a few years to come, it will be amongst one of the biggest names in the movie industry.