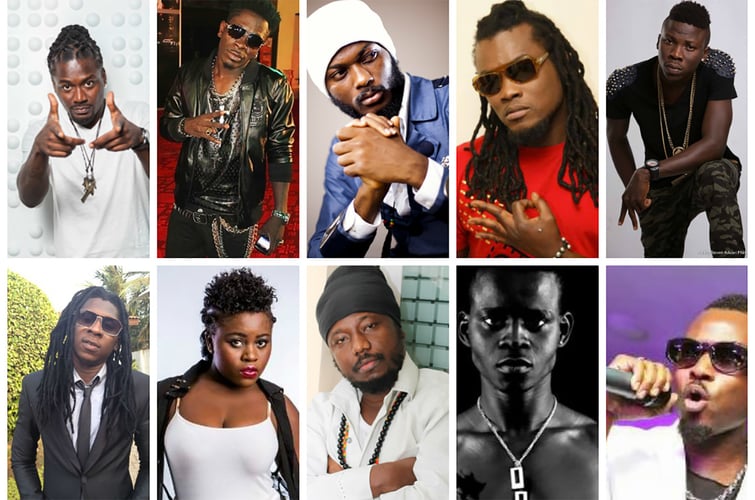 Dancehall music originated from Jamaica and is loved by many other Africans, including Ghanaians. The most popular genre in Ghana is Afrobeat, but there are a few dancehall artists in Ghana who have been in the limelight for some time now. They amass wealth from doing this type of music. Some of the most popular and rich dancehall artists in the world are Shaggy, Vybz Kartel, Sean Paul, Buju Banton.

Who are the richest dancehall artists in the country? What is their net worth? Do they make money only from the music they do? Continue reading this article to find out.

Shatta Wale, born Charles Nii Armarh Mensah is one of the most popular musicians in the country. The 36-year-old s always the center of controversy. formerly known as Bandana, he has been in the industry for quite some time. Shatta Wale is worth a whopping $6.2 million.

Shatta has received more than two honoree awards in the United Kingdom, the United States, and Nigeria.

Livingstone Este Satekla, popular known by his stage name Stonebwoy is one of the best dancehall artists in the country. The CEO of Burnition Music has been in the system since 2009 and has worked alongside big names like Shaggy, Sean Paul, Patoranking, Samini, and others.

Stonebwoy is worth $5.6 million and his music has been recognized by people all around the world and has won most of the awards he has been nominated for. Like the ‘best international act’ at the 2015 BET awards, ‘artist of the year’ at the 2015 Vodafone Ghana music awards. ‘Best African reggae’ at All Africa Music Awards, ‘reggae dancehall song of the year’ in 2016 and 2019, and many others.

He signed an endorsement deal with Big Boss Energy Drink. In 2020, he was named the brand ambassador for Tecno Mobile and he unveiled the Camon 16 series that same year.

Stonebwoy has a merch shop n Ashaiman, revenue from this shop are used to fund activities of the Livingstone Foundation which he established in 2017.  He even announced a sponsorship package for students from his alma mater Tema Methodist Day Senior High School.

Emmanuel Andrews Samini is one of the oldest in the industry.  Since 1999, he has been releasing back to back hits. He has worked alongside Sarkodie, Stonebwoy, Kaakie, Wizkid, and many others. Samini was even enskinned as a chief in his hometown.

With hits like Linda, My Own, Iskoki, etc., he has won numerous awards including the ‘artist of the year’, ‘most gifted reggae dancehall artist’, ‘best African act’, ‘album of the year’ and so on. His work has been recognized in and around Ghana.

In 2019, Liberty Professionals appoint Samini as their brand ambassador. He also signed a deal with FBN Bank in 2020. Another notable brand association was with MTN.

Mzvee hit the big stages in 2012, she has released music elements of afro-pop, RnB, and dancehall. She became of the biggest faces in 2015 where she was awarded the best new artist, female vocalist of the year, most promising act, and Best International Artist nomination at the BET awards and is worth $1.6 million at age 28

Mzvee came in competition with kaakie, Ak Songstress, and even called herself the ‘dancehall queen’.

She is still in the spotlight as one of the best female artists in the country right now who has worked with artists like Stonebwoy, VVIP, Yemi Alade, and others.

She was appointed by World Bank ambassador in 2015.

The last on our list is kaakie, born Grace Kaki Ocansey Is undoubtedly one of the best female dancehall artiste in the country, with his like Too Much, On dem, DC turn up, Koomcha, and many others. She is worth about $1 million.

In 2013, Kaakie, together with Edem and Jason E-LA was appointed brand ambassadors for Adidas and in 2015, she and award-winning actress Yvonne Nelson became Glo Ambassadors.

It is quite evident that these artists do not make money from the music they do but also through ambassadorial deals and other businesses. Did you find your favorite artist on the list? If you didn’t, they probably are not as rich as you thought, but hey! Talent is always enough.