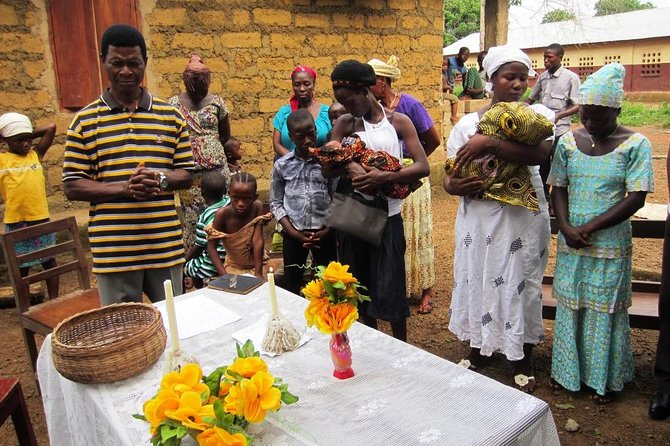 Ushering a newborn into the world is one of the joyous rites of passage done here in Ghana. A child is given an identity.

The name you give a child is known to play a big part in their lives. In Ghana, we name our children considering their day of birth, the special circumstances through which they were born, and in some ethnic groups, their clans. Some of them are given “Christian” or “western” names as well.

Again, names are known to play a part in the lives of people. Your name defines you, and it is who you are. I come from the Volta Region of Ghana, and I have heard a few names that are just “no,” names that are meant ridicule, curse names, and more.

A few I can recall are:

.”As crazy as that sounds, those are the names of some people, and you might be wondering why their parents gave them those names. I wish I knew as well.

But the days of naming children to ridicule them, curse them or name them after gods and goddesses are over. This is why the naming ceremony was introduced, and we are no longer in the 17th or 18th century.

The Akans and the Ewes. It is usually a short and simple program, ushering the baby into society and giving it a name, accompanied by merrymaking.

Outline of the programme for a Naming Ceremony in Ghana

How the Akans Name their New Borns

First, the baby is outdoored on the 8th day after it was born. The outdooring is done before sunrise to introduce the baby to the world. The outdooring can do it on the same day as the naming ceremony.

The child can not be sent outside until the 8th day because it is considered bad luck. They have to know if the baby has come to stay. Suppose it dies before the 8th day is considered a stranger or “ohoho” in twi.

Family members and close relatives are gathered after the outdooring; customarily, libation will be poured at the entrance of every door and the house entrance.

The families are clad in white to symbolize a new beginning, fertility, and happiness. They will bring a cutlass, broom, basket, and calabash to the ceremony.

The baby is bathed, brought to the ceremonial grounds by the father’s family, and given to an elder who is known to live an exemplary life, together with other elders. The baby is stripped naked, placed on the lap of the elder.

There will be two cups containing water and alcohol. The elder dips his finger in water and puts it on the baby’s tongue, and does the same with the alcohol. This is to teach the child to be responsible in the future and tell the difference between truth and lie, good and bad.

The elder then asks the child’s name from the father and calls it out to the guests together with the meaning of the name.

The Akans name their child using the day of birth, the gender, and sometimes the special circumstances through which they were born. After the baby is named, they are placed on a mat and lifted three times.

How Ewes Name their New Borns

Just like the Akans, the Ewes outdoor and name their child on the 8th day. It is called “vihehedego.” Bringing the child out before the 8th day is not allowed. People need to know if the baby came to stay or is just “amedzro” or a stranger.

When relatives and friends are gathered, they begin the program with a Christian prayer to thank God for the life of the baby and the gift of fertility.

A delegation from the father’s side is sent to bring the newborn from its mother. Libation is then poured to God, the lesser gods, and ancestors.

Water is sprinkled on the child, and in some parts of the Volta region, sugary water and alcohol and dipped on the baby’s tongue by an elder to teach the child the difference between good and bad.

In other parts of the Volta region, there is no dipping of water or alcohol. The mother will be present with the baby and some elders. In front of her will be a bowl.

People are the ceremony will come one by one to present gifts and shake the child’s wrist. , afterward, the child’s name is mentioned by the elder. The father chose a name.

And last, the Anlo people of the Volta region also lift the child under the tip of a hut. Water is poured on top of the hut and allowed to drip all over the baby.

Gifts are presented to the baby by the parents and attendees. The name is mentioned to the crowd, and prayers are said.

There is always merrymaking at the end of the ceremony.

Naming ceremonies are simple and do not cost much. Each tribe and how they choose to do it, mostly depending on how westernized the parents are. Fun facts, the people of the northern region outdoor and name their child three to four days after the child is born.

The Akans and Ewes tie strings of beads known as “Axokui” on the wrists of twin children to protect them from evil spirits.

How is the naming ceremony done where you come from? Leave a comment.