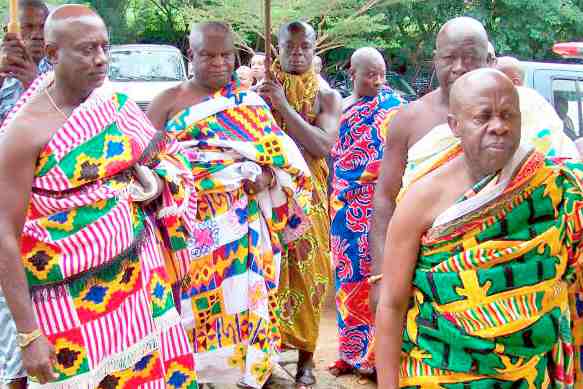 Ghana is one of the most peaceful and democratic countries in West Africa. It has the second-largest economy in the region and its citizens enjoy better living conditions than any of their neighbors. Many people have heard of the fascinating history and lively culture of Ghana, but not many know about its chieftaincy institution. This article presents you with a list of paramount chiefs in Ghana.

The chief is the head of state in Ghanaian traditional society and governs with the help of his or her council of elders, age grade, and secret societies. Since the introduction of the 2010 Constitution, which established local government areas, chiefs have been under the authority of these bodies rather than the central government.

A number of paramount chieftaincy titles exist in Ghana, some based on tradition and others based on British colonial positions now used to bring together two or more local government areas that were previously ruled by different chiefs.

Who is a Paramount Chief?

A paramount chief is the leader of a tribe or an ethnic group. He or she is usually the head of state and is chosen by members of a particular tribe or ethnic group.

How many Paramount Chiefs do we have in Ghana?

The National House of chiefs consists of five Paramount Chiefs from each region elected by the Regional Houses of Chiefs.

Who is the richest Chief in Ghana?

What is the difference between the Chief and Paramount Chief

They used it as a substitute for the word “king” to ensure that only the British monarch held that title. Since the title “chief” was already used in terms of district and town administrators, the addition of “paramount” was made so as to distinguish between the ruling monarch and the local aristocracy.

Among the various tribal groups, there are a number of paramount chiefs. Paramount Chiefs are seen as having the most power and influence among their people. The following is a full list of Paramount Chiefs in Ghana.