Freemasonry in Ghana: Members, How to Join, Myths, Facts and Opinions 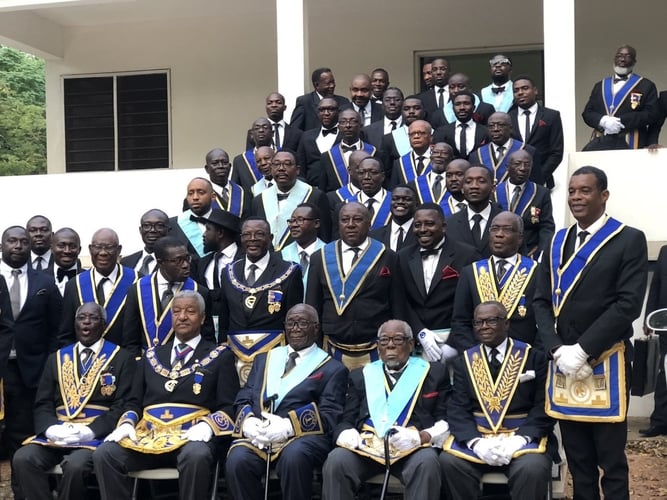 Freemasonry in Ghana, people hear this and they are scared to their stomach. Who are they? Are they people in a secret society who are planning to take over the world? Do they kill people for money? Who exactly are they!? We all asked ourselves these questions, you will probably get some answers after reading this article.

What is Freemasonry and When was it Consecrated in Ghana?

Freemasonry is a fraternal organization, people who are members share common interests. They trace their origins to stonemasons that formed at the end of the 14th century. The very first masonic lodge(a place of gathering) was officially consecrated in the early 19th century in the then Gold Coast by the Europeans

These lodges are governed by the United Grand Lodge of England and Wales, Grand Lodge of Scotland, and Ireland. The fraternity forbids political and religious discussions but they are expected to believe in a supreme being and are thought the principles of friendship, responsibility, philanthropy, and charitable contributions. In short, the organization teaches good virtues that center on kindness and loyalty.

More than 20 grand lodges have been consecrated in different regions in Ghana under different constitutions, all from the 1800s to 2008, with different Masonic chapters in Accra, Cape Coast, Sekondi, Tarkwa, Kumasi, Winneba, Tamale, Abetifi, and Ho. It has seen more than 10 grandmasters since it’s introduction.

Notable People who are Freemasons in Ghana

Apart from numerous ‘big men’ who are Freemasons in the country, there are many notable people, politicians, monarchs who are also Freemasons. Some of them include Akwasi Afrifa, a former soldier and Head of State. John Agyekum Kuffour, who is the former President of the Republic of Ghana. He was even appointed Senior Warden at the United Grand Lodge of England in 2001.

There are also diplomats like James Aggrey-Orleans, Edward Asatu, K.B Asante, William George Branful, and many others. There are notable politicians like J.B Danquah, Ebenezer Ako Adjei, Obetsebi Lamptey, Yes, you read that right, those are members of the ‘Big 6’ for fought for independence for Ghana. And they are not the only ones, many other politicians are members.

Traditional leaders and monarchs are not left out. Ofori Atta I, Daasebre Oti Boateng, Osei Tutu Agyeman Prempeh, and Otumfuo Osei Tutu II, Asantehene who is presently the Grand Patron, Grand Lodge of Ghana and Sword Bearer, United Grand Lodge of England. You are probably asking if it’s only rich people who join the fraternity. Well, we can hardly tell, but you can apply to join if you want to. Here’s how;

How to Join the Freemasons in Ghana

-You will then be asked why you want to join the Masons, if you answer to satisfactory, you will be given a petition, something like a questionaire.

-It will be read, and the committee will then decide to meet you personally to examine you. It is said that this examination can take months. It is not a swift process. They really want to know the kind of person you are. What you do and what you can bring to the table.

-Whatever happens next is a mystery.

It is known that their internal affairs and laws are kept private. “There are certain subjects which are prevented or we simply proscribe from discussing within the lodge,” says Piers Vaughan, master of st. Johns lodge, New York. Hence, whatever they discuss when they meet is unknown to the general public, a little spooky isn’t it?

They say that it does not make you rich instantly, it gives you a way to be a better man, in strength, courage, honesty, and all things human. It is quite unclear if they have books, similar to a Bible or Quran, with laws and teachings.

The fraternity says it is not religious, as stated above, they forbid any discussions about religion and politics, but atheists are not welcome. Nothing religious makes it to their lodge. Then why is it necessary to believe in a supreme being? And why do they hold ceremonies in lodges that are similar to “King Solomon’s temple”?

They also at that the ‘all-seeing eye’ or ‘eye of providence’, which is found on Masonic Temples are only a symbol of protection and nothing else. They also wear aprons because of the supposed evolution of freemasonry from the stonemasons.

It is unclear if they have secret greetings and rings that they wear. And if they do, what does it mean? They have confirmed, though, that they are not planning to take over the world or anything of that sort. Another unclear thing is if there are rituals they perform, why they are so secretive, and which ‘supreme being’ they believe in.

What do you think?