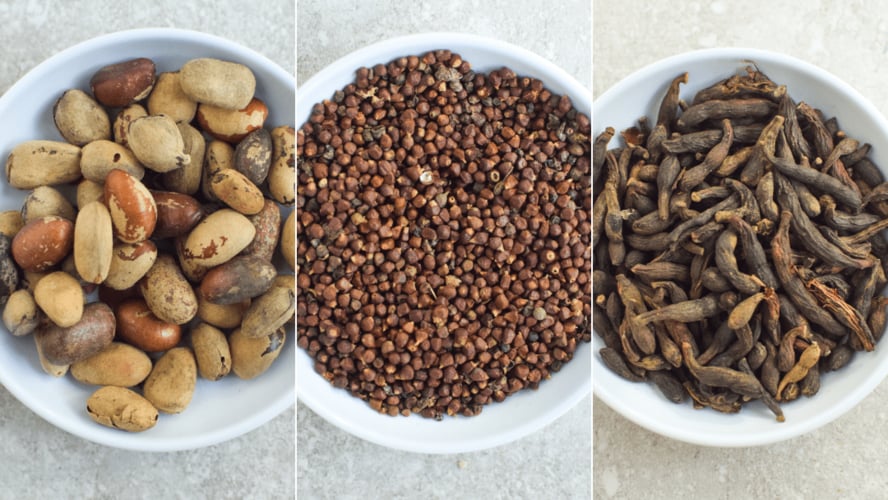 That sweet, spicy and delicious aroma you perceive when you enter someone’s chicken, a chop bar, or restaurant is spicing doing justice to the food being prepared. What spices do you use in your food? And I am not talking about Maggi cube and Onga, even though those are equally good for bringing out the flavor in food.

The local spices our mothers and grandmother’s use have been in existence since the world began, do you know what they called in your local language and what they are used for? Remie and Onga do not stand a chance if you know how to mix these local spices proportionally into making delicious food.

These spices are used in soups and stews, giving them a distinctive taste, making the taste of our foods different from that of other countries. Read on to know the names and nutritional benefits of these spices.

This is called Nkitinkiti in Twi and Ewe and Osu in Ga. These seeds when ground, poured into stew and soups, especially when they are almost cooked helps give the stew a burst of flavor and aroma.

It helps prevent bloating and is great for relieving stubborn cough

Cloves are called Dadoa Amba or Pepre in Twi and Ewe. It helps protect the liver, boost the immune system and prevent respiratory infections.

It also aids in digestion. Ground together with anise seeds can be used to spice meat.

Basil is called Akuko Besa in Twi. It can be used in soups. People from the volta region sometimes use it to cook chicken.

It works as an antidepressant to help with depression and anxiety.

This pepper is used in soups and stews to give it some heat even though it is usually for medicinal purposes.

It is known as Hwentia in Twi and Soh in Ga. Other names are Senegal pepper, Ethiopian, and Moor pepper.

This is not as hot as any other African pepper but it gives great flavour to food.

It can be used to spice eggs and stews. Knows as Esoro wisa in Twi and Ewe, it helps boost appetite, and prevent constipation

If you want to prepare very spicy food, this pepper will do the trick. It is known as Akweley Waabin in Ga and Mise Wain in Twi.

Adding Mise Wain to your food can help reduce blood pressure and aid in proper digestion.

Potassium Carbonate is called Kanwu or Kaawe. It is sometimes used as a salt substitute, also used as a food thickener especially in Okro and Ayoyo leave soup.

Consuming too much potash can be dangerous to your health

This is the one we call dawadawa.

This bean surprisingly contains vitamins such as riboflavin and thiamine which helps with good eyesight and prevents hypertension. It is used in soups.

Other spices Ghanaians use in their foods are:

The next time you want to spice your chicken, goat meat, a cow meat stew, or soup, leave the processed spices behind and make use of your local spices. Most of these spices hardly go stale within a long period, so you can purchase them in bulk, put them in little containers and fill your kitchen with a mix of aromas.

How to scan for Satellite channels in Ghana