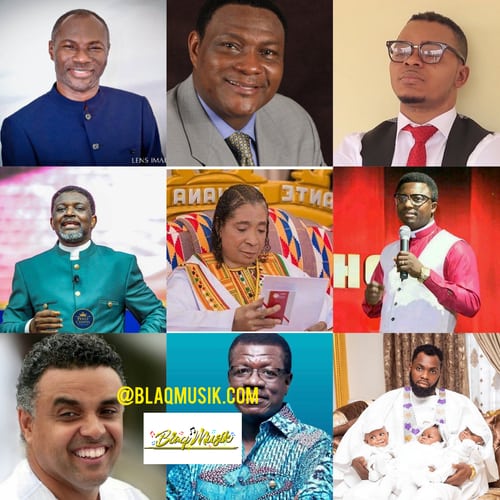 Churches, both new and old are numerous in Ghana, each with their head pastors, trying to convey the word of God to their congregation, according to their understanding. Most of these pastors are teachers, who went to a theological seminary, set up their churches to teach people what they studied, others, believe they got a ‘calling’ from God, to take his word to his people.

Either way, some of the head pastors and overseers of these churches have amassed so much wealth over the years, some of them cannot be explained. How do they do it? Apart from heading churches, some of these men are businessmen and entrepreneurs who engage in philanthropic efforts that get them awards and recognition all over the world.

You have been seeing pastors like Obinim and Obofuor displaying their wealth of social media and you are probably wondering how much they are worth, what they do, and what they use that much money for.

Below are the richest theologians and ‘men-of-God’ in Ghana, the top ten.

Duncan Williams is very popular in Ghana, he has been an archbishop for 20 years. As the general overseer and presiding archbishop of Action Chapel International (ACI), he is worth $6.9 million. He has branches of his church in North America, Europe, and Africa. Duncan was the first African pastor to have led a prayer at the inauguration of a president-elect in the United States.At 63, he is one of the most influential Africans and has done a few humanitarian works.

Apostle Safo is worth $6.5 million. This is not surprising at all, he is a religious leader, auto manufacturer, a successful businessman, and a visionary. He is called the ‘star of Africa’ because of the many amazing things he has done, Kantanka is the first man to have build an electric car in the country, he is also the first man in the world to have manufactured bass guitars with 7 strings, and these are just two of the amazing things he has done for the continent. He is also the founder of Kristo Asafo Church. Apostle Safo’s mission is to empower Africa to become economically independent through the application of the knowledge of science and technology.

61-year-old Mensah Otabil is the founder and head pastor of International Central Gospel Church (ICGC). The entrepreneur, motivational speaker, and theologian are worth $6.3 million. He is also the founder and chancellor of Central University and CEO of Otabil and Associates. ICGC has other local assemblies in Europe, the United States, and Canada. He has been named one of the most reputable Africans, and one of the most reputable Ghanaians. He hosts a television program called Living Word where he teaches, preaches, an advises individuals about the important things in life. Despite his Capital Bank saga, he has remained one of the richest Pastors in the country.

‘Obofuor’ as he is passionately called is worth $6.1 million. The head pastor of Anointed Chapel International has already been displaying his expensive lifestyle on social media. Even though his source of wealth is unknown, in a sense that, apart from the church he owns, it is unclear if he has other businesses he does. He has been the centre of controversies over the years and has engaged in philanthropic efforts.

58-year-old Agyin Aware is the founder of Perez Chapel International. He is also the Chancellor of Perez University College. A theology school aimed at training individuals who want to be well vexed in the knowledge of the Bible and also teach others about it. Agyin has won a few awards for his impact across the globe. He is worth a whopping $5.5 million.

Bishop Dag is worth $5 million. Apart from being the presiding bishop of the United Denomination Originating from the Lighthouse Group of Churches, he is also the founder of Anagkadzo Bible and Ministry Training Center, to train individuals who want to learn about God and his ways. Dag is also an author and counselor. He and his wife are also involved in various humanitarian efforts, like feeding the poor, prisoners. Treating patients free of charge in deprived towns and villages. He even founded the Lighthouse Medical Mission Hospital and Fertility Centre in 2008.

Also known as prophet 1, Yiadom is the overseer of Miracle Worship Centre. He is worth $4 million. He sometimes displays his lavish lifestyle on social media and has been the centre of controversies a few times.

The minister of the International Godsway Church is worth $3 million. The controversies around this man are endless. He is branches of his church all over the country and his source of wealth is not known. it is known that Obinim helps needy young people in his church, takes them through school.

The 56-year-old founder and overseer of Royal house Chapel International is worth $2.5 million. He is a philanthropist, entrepreneur, author, and motivational speaker. He heads the School of Restoration, which serves as a rehabilitation center and school for armed robbers, commercial sex workers, and addicts. He also offers scholarships for brilliant but needy students.

At number 10, is the founder of Glorious Wave Church International and president of Kingdom Bible College. Prophet Emmanuel is worth $2 million. As a philanthropist and a businessman, he has helped many people in and outside his church.

Even if your head pastor is on this list or not, it is still the same message they are conveying to you congregants, and by all means, they are helping needy people in the congregation, teaching and counseling individuals who need it, just like any of these evangelists above. Which one surprised you the most?

Iron Rod Prices in Ghana And Where To Buy From

Shomax Ghana: Channels, How To Subscribe, Price, and More